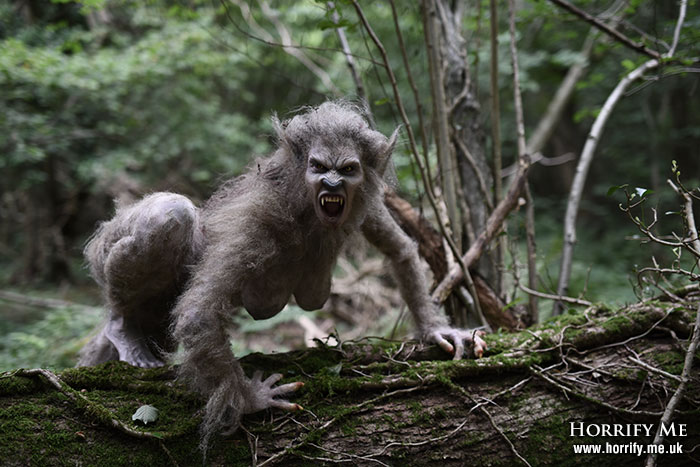 It first crossed my mind to create a female ‘full body’ werewolf some time ago. I always remember meeting David Naughton (the actor from American Werewolf in London) in Sheffield and he talked about the makeup process of that movie. It consisted of very early starts, around 3am, for 10-12 hours of makeup and hair application by Rick Baker and his crew, followed by a day of shooting. By his account, it was a laborious mission, which went on like this for several days. But it paid off for the movie, as it created an unforgettable scene showing a werewolf transformation, which has simply never been equalled. It also won Rick Baker the first special makeup effects Oscar and earned American Werewolf in London a place in film history.

I had no intention of going up against Baker’s legendary Kessler wolf. But what I did take from the American Werewolf creation was the method. If Baker and his team could make a person hairy and scary with a 3am start time, then surely, I could too? With enough hair, glue, assistance and a willing model, how hard can it be? How hard? Very, was the answer. It was by far one of the most challenging projects I’ve taken on so far. But I had great help and a wonderful model, willing to see this project through.

A young makeup artist named Raven-Cheyenne Caistor sculpted and cast of a fantastic face-piece for the She-Wolf. She is an outstanding talent in horror makeup and prosthetic fabrication and I was lucky to get her on board with the project. I was very keen to showcase her incredible skill, so I gave her the job of creating the character of the She-Wolf.

The model was Kari Kalamity and her partner in crime, Paul J Mathias, attended also, in order to help glue the fake hair on. The process began with a full body paint. We painted Kari in pale skin tones and did a bit of light airbrushing to pick out a few contours here and there. Then the process of making her hairy began. I wanted all the hair to have a natural growth pattern, like a real animal. That meant observing direction and mass. For example, the hair would have grown down from the shoulder but upwards from the wrist, colliding at the elbow, and would be long on the forearm. The shoulders would need to have volume to create a sort of mane and the hair would need to thin out around the tummy and chest areas. This process took three of us, working solidly for 11 hours (33 man-hours in total) to glue all those bits of hair on, a piece at a time, following a careful growth pattern. As we worked, I thought back to the words of David Naughton and was reminded of the punishing process he went through. It was certainly challenging but we had fun doing the work and time flew by pretty quickly.

I always love spontaneous ideas and we had the idea of giving Kari lots of nipples, like a real dog. Raven went off with a bottle of latex and whipped up six fake nipples, which were promptly glued on and painted. These off-the-cuff moments are always fun.

We decided that Kari’s face prosthetic would be the last job, just for the sake of her comfort. Raven applied the prosthetic, which I painted, and then we got busy glueing more hair on her head and face. One thing that I was unsure of was the ears. I found a cheap pair of big pointed novelty ears on eBay, which looked ridiculous. But once they were stuck on and had a bit of paint and hair slapped on, they actually looked pretty good.

Many hours later, we had a full body, hairy wolf-girl. We had finally finished and were all tired. And we still had the shoot to do. Starting the makeup at 3 am was a good decision, as it gave us plenty of daylight time to get some shots in the nearby woods. I did two sets for the shoot; one in the woods in natural light and one in my studio with atmospheric lighting. I also dragged half the woods into my studio to dress the backdrop.

Kari is an amazing model with an uncanny ability to inhabit a character. As the She-Wolf, she writhed and prowled like a real pack hunter, snarled her teeth in an unsettling manner and held herself like a real wild beast. And, in between, she’d giggle and mess around to make us laugh.

There was absolutely no way I could have done this project without the help I had. Everyone put their all into it and the resulting photos look pretty awesome.

Rick featured in our Issue 25 with his She-Wolf photoshoot. You can read the rest of our issue FREE here.