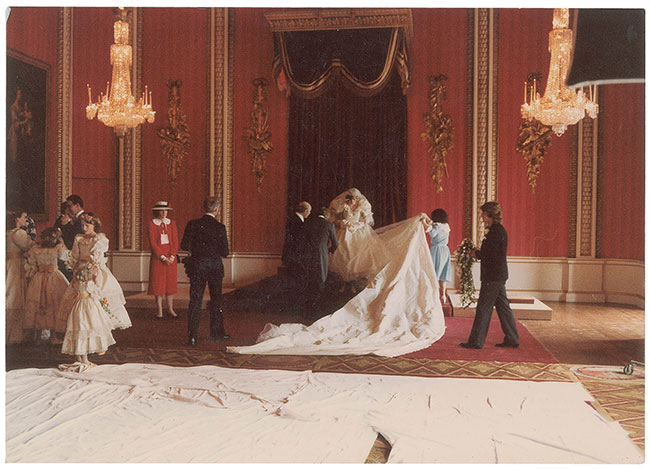 We just love Elizabeth Emanuel’s incredible designs and have followed her ventures since our interview with her for Issue 4 (read our interview here).   So, it was great to watch the news and see Elizabeth, Princess Diana’s wedding gown co-designer, being interviewed, where she spoke about that dress again. This followed the broadcast that some previously unseen images of Prince Charles and Princess Diana on their wedding day are to be auctioned on the 24th September, in Massachusetts, USA. Why in America? Apparently, they still have a massive interest in Princess Diana over there.

According to Bobby Livingston, from the company that is overseeing the auction, they are expected to fetch well over £10,000. The pictures are a small collection of 14, candid and informal, behind-the-scenes photos of this magical wedding, taken after the ceremony at St Pauls’ Cathedral on 29th July, 1981. They are not part of the official set of photographs shot by Lord Patrick Lichfield but were taken by an assistant of his, Henrietta Gordon-Cumming.

Ms Gordon-Cumming maintains that these photographs, taken just hours after the wedding at the reception in Buckingham Palace, have never been published before and that few people have ever laid eyes on them. Most show the wonderful vision of Diana in that beautiful dress, designed by David and Elizabeth Emanuel.

Some of these photographs are striking, particularly those where Diana is smiling happily with her bridesmaids and that powerful image from behind, as she and Prince Charles stand on the balcony of the Centre Room, looking at the thousands of people below them in the Mall.