The 2015 Great British Tattoo Show was presented by the publishers and organisers of Skindeep, Tattoojam, Tattoo Master, Manchester International Tattoo Show and Tattoo freeze.   The Tattoo Awards at the show were a close fought contest and amongst the most prestigious tattoo convention awards to be taken home this year.

And ‘wow’, what a show it was. With over 300 amazing artists exhibiting there was so much to see. Although mainly all things in tattoo, all weekend they showcased the best in alternative clothing in a host of hot fashion shows with fabulous tattooed babes putting on a show. There was leather and latex, fabulous Vintage outfits and urban wear, with even guys strutting their stuff down the catwalk! 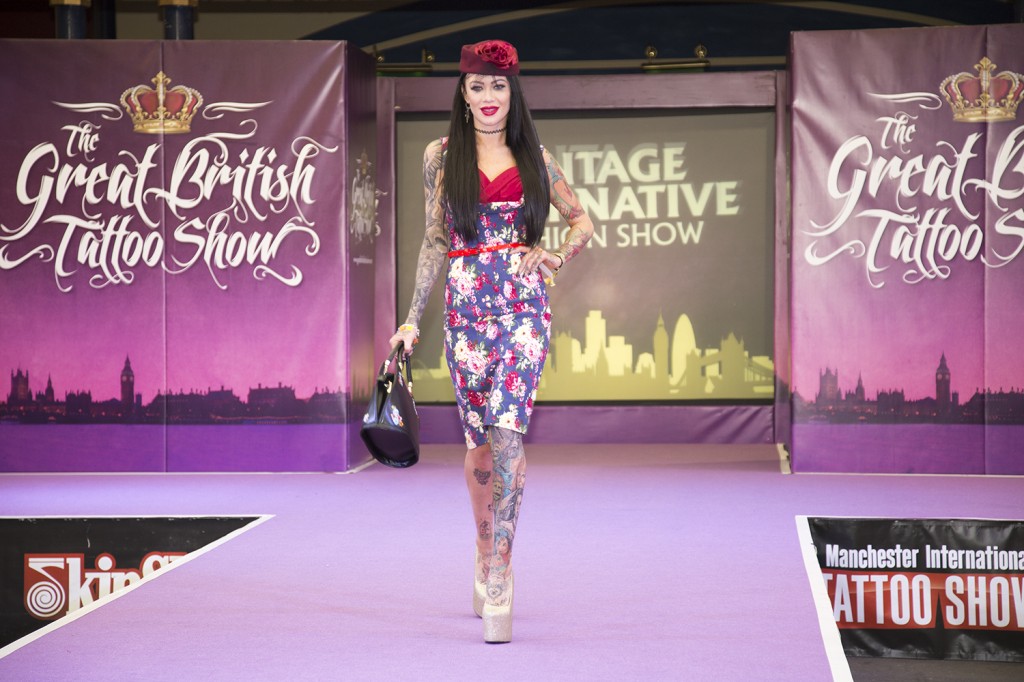 Some of the exhibitors in the fashion show. 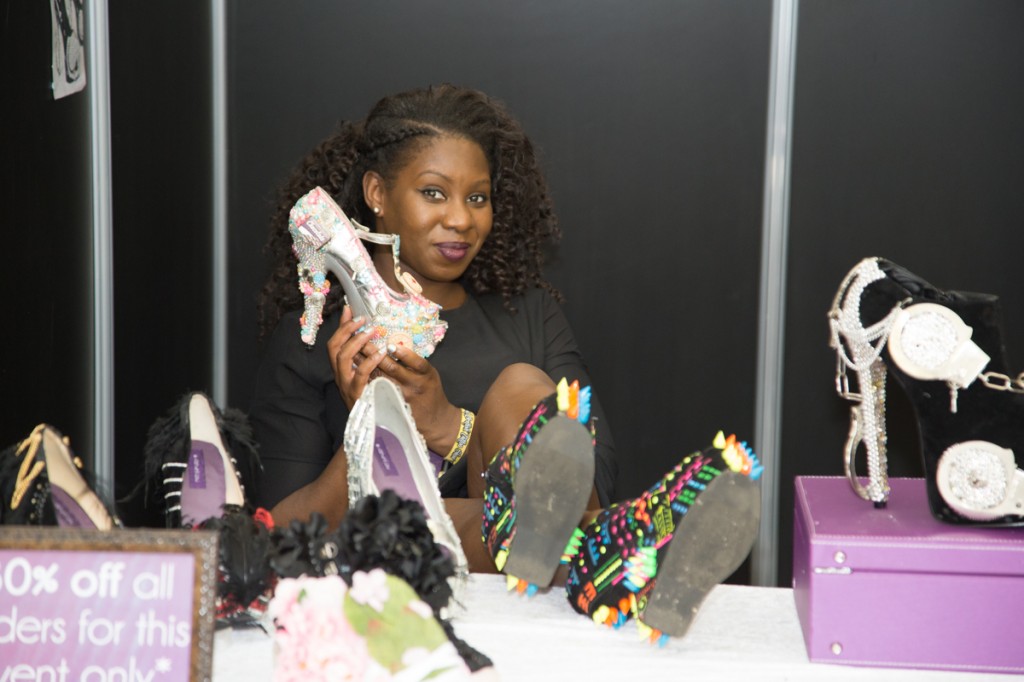 There was a performance from Leah Debrincat on both Saturday and Sunday. She is a specialist in fusion belly dance and sword. Her career has included shows for Time Out, MTV (Ema) Awards, working with fashion photographer Nick Knight and Showstudio, Erotica, Lovebox festival, launches for Game of Thrones, Diet Coke and Jean Paul Gaultier.

Aurora Galore, the UKs number one burlesque dancer also performed on the Sunday. The vivacious and curvy Bambi Blue, another burlesque dancer treated the audience to her performance on Saturday.

At the show were lots of brave people (well they gave us a smile when we asked for a picture) not only having various parts of their body tattooed but subjecting themselves to an audience.  What was incredible was the creativity and artistic skill that was on show, with so many different styles. It was memorising to watch.

There was magic from the big smoke’s Damien O’Brien, the star of BBC’s ‘Killer Magic’. Damien is heralded as the world of magic’s gifted boy wonder and leader of the new school of street magicians. From cards to coins, watches to fire and even a bit of mind control and levitations, Damien captivated his audience on both days of the show.

The very talented caricaturist to the stars, Spot-On George was at the show. He entertained the masses with his quick draw caricatures. George, who draws for TV Times magazine, gained notoriety for his many TV appearances and his commissions from celebrities like Amanda Holden and Brad Pitt. It is these sketches which earned him the title of ‘Caricaturist to the Stars’. George offered his own brand of twisted caricatures at the show to those wanting an original ‘Spot-On-George hanging on their wall.

There were artist seminars over the weekend where you could learn something new or improve on what you already knew. They were free to join, on a first come, first serve basis. Tattoo Regret – Laser Tattoo Removal Seminar, introduced PicoSure laser, by ProSkin Clinics. They ran two sessions, one on Saturday and the other on Sunday. There was a raffle of up to £1,000’s worth of treatments for all those who attended the seminars. The Caliginosity seminar, by Ryan ‘The Scientist’ Smith was run on Saturday. Ryan is a multi-international, award winning tattoo artist who works at Studio Ink. He is well-known for his dark and twisted futuristic style, as well as his uniquely distinctive black and grey work. This seminar was for registered artists only and was sponsored by Quantum Tattoo Inks.

At the Grooming Parlour, there was Sandyman Chop Shop, a traditional, old school Barbershop, specialising in retro hairstyles and wet shaving and Apothecary 87, with their heavenly scented beard oils and firm moustache waxes.

GBTS presented a brand new competition this year called ‘Beauty and the Beard’, sponsored by Apothecary 87 and Ashanti Lou. Calls went out for beautiful babes and facial hair fanatics alike and they battled it out to be crowned King and Queen of Beauty and the Beard. Winners of this year’s competition took home some great prizes. Apothecary 87 gave The Beard a £100 goodie bag full of beardy treats and two pairs of incredible Ashanti Lou Shoes were given to the Beauty.

The compere of the GBTS, Paul Sweeney, is a YouTube hit and a fast-rising comedic superstar with a passion for ink. He has gigged all over the country and is quickly making a name for himself. His wildly imaginative style of musical comedy, combined with his own eclectic taste and unique sensibility, is in turn both entertaining, beguiling and infinitely charming.

There was live music from ‘The Brothers Unplugged Lounge’, a chill out area at the heart of the show where you could grab an ice cold Brothers cider and relax, whilst listening to some great tunes from a number of super-talented acoustic acts who played all weekend. 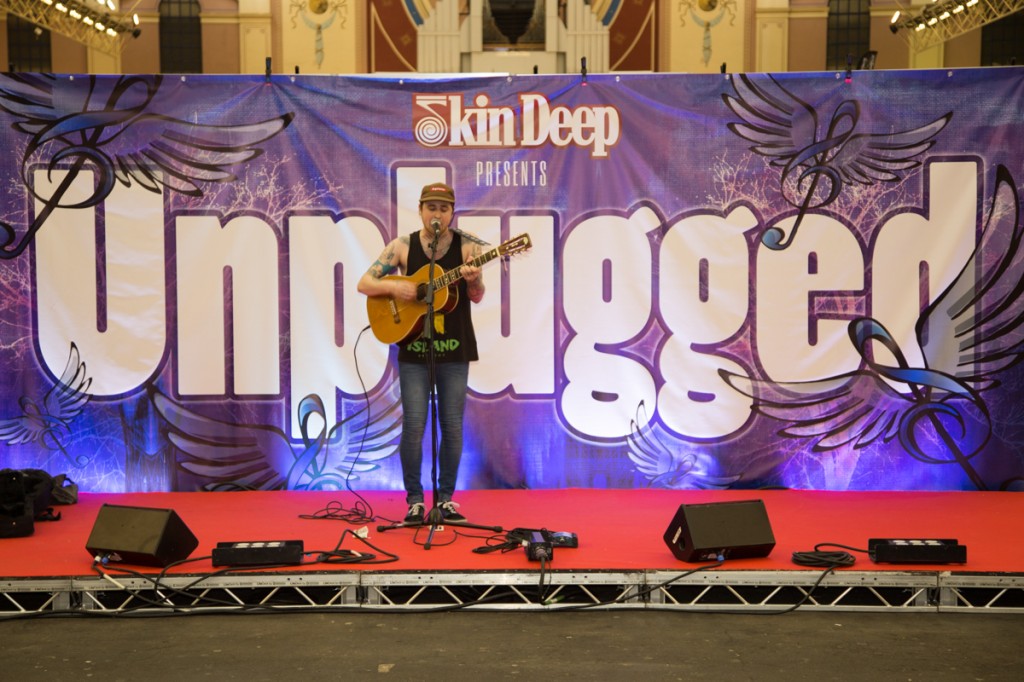 Last but not least were the Skin Deep Magazine Cover Girl signings. Gemma Kahlua was at the show all weekend to sign copies of Skin Deep magazine (issue 251), signed by Gemma at the information stand.

The weekend was rounded off by the thrilling Saturday night party and the after show chill party on the Sunday in the on-site pub, The Bar & Kitchen at Ally Pally.

Alexandra Palace opened in 1873 on Queen Victoria’s 54th birthday with a grand celebration of fireworks, concerts and recitals. However, tragedy struck only sixteen days later when a fire broke out there. The new Alexandra Palace was opened to the public in 1875. It housed a Henry Willis organ, which was one of the largest in Europe at the time.

In 1888, Dr Barton built his airship in the grounds of Alexandra Park and Queen Mary came along to the palace to inspect the arrangements.

In 1936, following the introduction of the 1900 Alexandra Park and Palace (Public Purposes) Act, Alexandra Palace was made free to the public for the first time.

During the WWI Years (1914), the palace was requisitioned by the Government to be used first as a Belgian refugee camp and later as a German and Austrian internment camp for the duration of WWI.

In 1930, E. M Stevens, a French BBC broadcaster, spoke from the palace and on 2nd November 1936, Alexandra Palace became the birthplace of the BBC. The world’s first, regular high-definition public television broadcast took place from the BBC studios there.

Then, in 1980, for the second time, the palace suffered another fire and large parts of the building were destroyed. After much restoration work, it re-opened in 1988. By 1996, the palace was recognised as a building of special architectural and historic interest and it is now a Grade II listed building. Today, the palace still enjoys a lively and useful function and hosts events, concerts and exhibitions.

It is still the people’s palace.