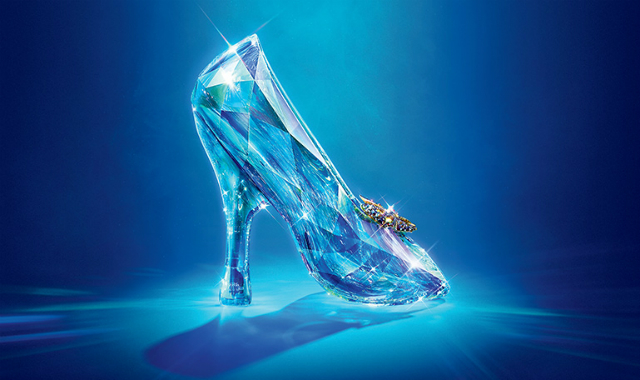 It is the 65th anniversary this year of the classical animated Cinderella and it is being celebrated at the Disney’s Cinderella Exhibition. It is presented by Swarovski and is the official showing of props and costumes used in the making of the magical new movie ‘Cinderella’. The film stars Lily James, Cate Blanchett, Helena Bonham Carter and Richard Madden and was directed by Kenneth Branagh.

The exhibition honours the tradition of the original Cinderella whilst taking you behind-the-scenes of the film-making, production and costume design of the new movie. It is a journey through five multi-sensory zones that include the Cinderella heritage gallery, Cinderella’s home, Fairy Godmother’s Transformation, the Grand Ballroom and a Modern Day Princess Gallery. This is where the beautiful Lily James is introduced to us as the new Cinderella.

On show are over 100 props used in the film and over 30 exquisite costumes designed the Oscar winning Sandy Powell, the Academy Award-winning costume designer.

The new Cinderella film is a fashion fairytale that hits the screens today. With designs created by Sandy Powell, this movie is a joy to look at and set to be a great success. Powell wanted to create a look of a 19th century period film made in the 1940s or 1950s and she does that. The iconic blue dress worn by Cinderella is stunning.  It took 20 people some 500 man-hours to create this multi-layered ball gown. It has 8 skirts, with a circumstance of just over 11m. That is quite something. It is then covered with over 111,000 finely cut Swarovski crystals which give the gown its sparkle, depth, colour and total glamour. There has been some controversy concerning the star, Lily James’ tiny waist, which is said to be just an ‘optical illusion’. You will have to decide for yourself on that one.

The glass slipper weighs just over 1kg and took approximately 150 hours to perfect. Six versions of it were made before the final model was decided on. Special effects were used on Cinderella’s shoes. Lily wore leather shoes, which were later transformed into the sparkling slippers.

The Cinderella Exhibition, presented by Swarovski, will be open until Friday 10th April. Admission is free but ticketed. For more info, visit: www.disney.co.uk/cinderellaexhibition. Cinderella hits cinemas on March 27.

The exhibition will be in the gardens of London’s Leicester Square for a limited time only but Cinderella, the new movie is in cinemas now.

Advance tickets to the exhibition are now fully booked up but there are still daily walk-up tickets available. See the onsite box office in Leicester Square Gardens.

*Phone lines are open 9am – 6pm Monday to Friday. For any enquiries out of hours please contact us via email and we will respond as soon as possible